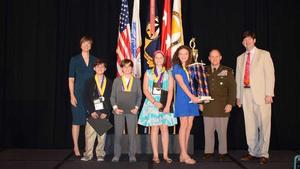 The St. Richard team created a device, the Steer Deer Clear, to prevent deer and vehicle accidents by producing variable light and sound signals that deter deer from approaching the road. The team is comprised of students Benjamin Manheim, Neel Boteler, Maley Thornhill, and Lily Frances Garner and is led by team advisor Ashley Klein.

Each team member will now receive $10,000 in U.S. EE savings bonds at maturity.

The weeklong event, which took place June 27 to July 1 at the Omni Shoreham Hotel in Washington, D.C., saw five National Finalist teams per grade level from across the country compete for the grand prize. Teams presented their eCyberMission projects to a panel of senior scientist and engineer judges from the Army, who then unanimously selected the national winner for each grade level. Winners were announced at the national awards banquet, which took place on July 1.

“The STEM projects presented this year by these imaginative teams provide true solutions to many of the challenges our communities are facing,” said Erika Shugart, executive director of the National Science Teaching Association. “Congratulations to the National Winners and their Team Advisors on their outstanding projects that represent the kind of collaboration, creativity, and ingenuity that not only benefits the community, but also inspires other students who see that they can be problem solvers too.”